Skip to content
MENU
Homepage / Blog / An Understanding Of SCART vs. Component

With new audio-visual technology being invented daily, it is astounding to see the quality enhancement in videos and images in the past few decades. Also, the gaming experience, due to such enhancements, has left the monochromatic past. The video signals like the component, composite, HDMI, s-video, SCART, etc., have been the reasons for the changes. Before installing any audio-visual equipment, it is essential to know these signals and connectors. This article explains SCART and Component video signals and their differences.

See more: The Basics of SCART vs. Composite

See more: The Basics of SCART vs. HDMI

First, let’s understand the basics. When a video camera captures a scene, the lens receives the light in three colors: Red, Green, and Blue or RGB. This light travels through the sensors and produces RGB signals. Now the transmission and storage of RGB are possible through various connectors.

TVs and computer monitors use this system. The combination of RGB makes other colors. The white color formed when we mixed Red, Green, and Blue in equal amounts. And you get black by negating all the colors. A single dot or picture element, commonly known as a pixel, comprises these three colors.

Required signals are sent over the cables and connectors for these pixels to illuminate as a picture. The signal sent are so fast that when seen on the screen, the color changes frequently and projects a moving picture.

Earlier, analog signals were transmitted through connectors and cables. But as technology advanced, the priority of digital signals over analog started to increase. Still, some devices with analog signals have immense popularity for SCART and Component signals. Let’s understand both.

SCART stands for Syndicat des Constructeursd’AppareilsRadiorécepteurs et Téléviseurs or Radio and Television Receiver Manufacturers. SCART connections gained popularity in Europe to connect AV equipment like TVs, DVD Players, VCRs, and gaming consoles. The use of SCART has reduced over the years, but its popularity remained the same. It is still used in some of the AV equipment.

When a device through the SCART connector is turned on, the TV will switch to the appropriate AV channel even after being awakened from the standby mode. SCART can also be used for high-definition signals like 720p, 720i, 1080p and 1080i. With the advent of digital technology with HDMI capabilities, the use of SCART has significantly reduced. But it remains a favorite of many.

SCART is a female connection that looks like this. 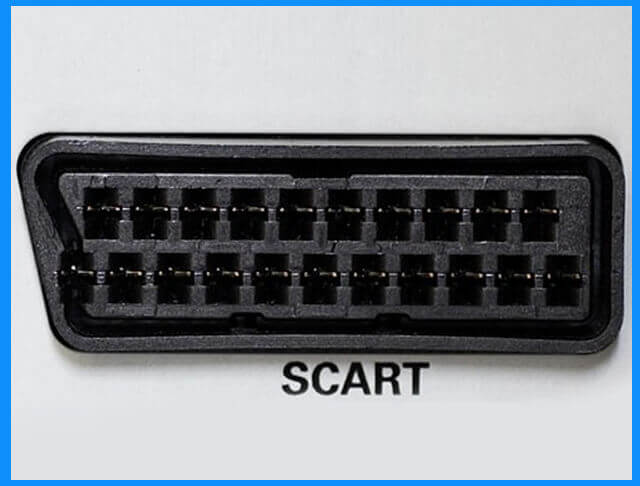 The male pins from the SCART cable are connected to this connection. 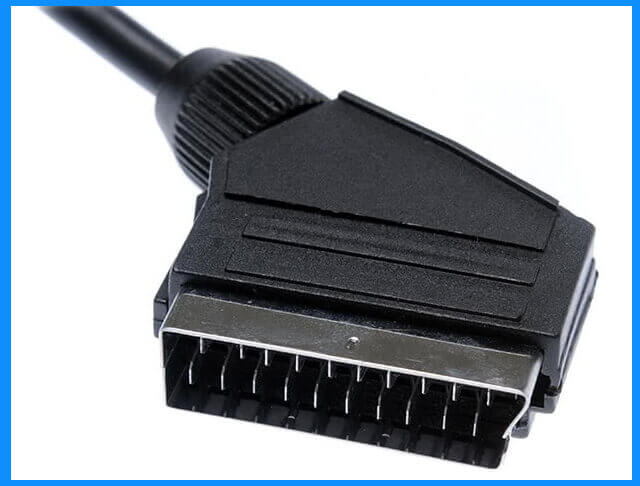 SCART cable has 21 pins to transfer the audio and video signals. If some cables are not fully wired, they hamper the RGB signal transfer. Otherwise, SCART is the jack of all trades. The best part about SCART is its versatility. It can transmit the signals in s-video, component, and composite video formats. Generally, this is all possible through the same connector. Even though SCART is versatile, it can’t send the above signals at the same time.

The component video signal is known for its high-quality pictures. It is an analog signal that gets divided into three different signals. The separation of various components ensures no overlapping of the signals. If due, for some reason, you can’t connect to the HDMI port or DVI connector in your equipment, turn to the component video connection.

Look at the rear of your electronic equipment, and you will find component output like this. The component input also looks similar. 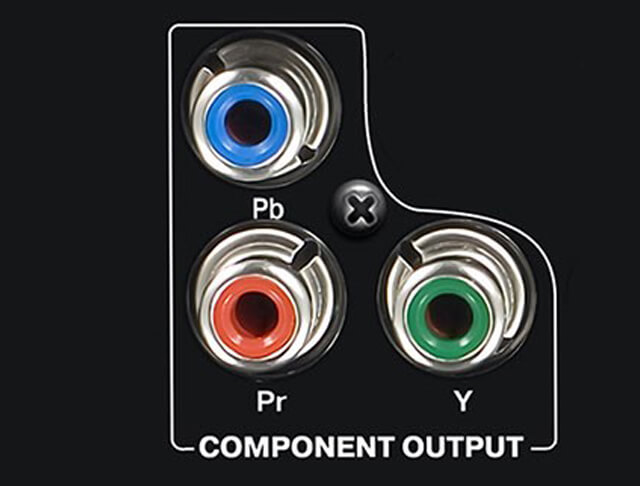 See more: Component vs. RCA Cable – Are They The Same?

Some electronic equipment has different notations for component signals. The monochrome signal is called Luma. It is the Y component that adjusts the brightness. Pb denotes the difference between Luma and blue color. Similarly, Pr signifies the difference between Luma and Red. When these signals are transmitted through three different cables, modulating their amount creates a colorful image on the screen.

Difference Between SCART and Component

Both are good options for analog transmissions. The use of SCART has undoubtedly reduced over the years, but some of its features still ace the game. A component is widely used in DVD players and gaming consoles, but due to the lack of certain features, a preferable switch to SCARt occurs naturally. To help you make an informed decision for your next TV, DVD player, or gaming console, we have tabulated the differences between SCART and Component. Let’s have a look at them.

Despite their pros and cons, SCART and Component have dedicated users. For a novice, the difference in image quality won’t matter much. But for a pro, specifications define the accuracy of the video. SCART and Component both works on analog signals. As opposed to digital signals, analog signals are susceptible to interference and distortions from radio waves. They also have lesser bandwidths and more compression as compared to digital signals. Further, this affects the picture quality.

Using SCART or component takes into account these factors. Though the performance is significant compared to digital transmissions, it still has popularity and is widely used worldwide.

See also  LG TVs and HDMI Ports: Everything You Need to Know