Are you also unaware of what Dolby Atmos means when you see it labeled in various speakers, home theatres, and smartphones? Want to know if you are experiencing Dolby Atmos experience? Here is everything you should know about Dolby Atmos and Dolby Digital Plus, apart from just knowing that they are related to music.

Along with these two words, you will come across terms like surround sound, mono audio, stereo audio a lot. So, let’s first know the basic terminology before comparing the two audio forms in layman words.

So, mono audio refers to audio coming from one channel. Stereo audio is when audio is coming from two channels. These two channels are essentially placed at the left and right side only. On the other hand, when the audio comes from multiple channels, including above, below, or behind, it is termed as surround sound.

Surround sound is a mixing process that may include up to 21 speakers and a subwoofer to produce quality sound. As the ‘surround’ word is closely related to 360 degrees, it surrounds the listener with sound from all angles making the sound experience more realistic.

This takes us to Dolby Digital Plus and Dolby Atmos, known for providing the gold standard surround sound.

What Is Dolby Digital Plus?

In general terms, Dolby Digital Plus is an improved audio technology that compresses large audio files without compromising on the audio quality.

What Is Dolby Atmos?

Dolby Atmos is a notch higher in providing surround sound as it is a surround sound technology, whereas Dolby Digital Plus is an audio compression scheme.

Dolby Atmos provides 3D surround sound with its object-based system, i.e., it uses speakers’ places at the top of the ceiling to bounce back the sound to the listener, creating a sound bubble.

Dolby Digital Plus audio system only supports horizontal placement of speakers, whereas the Dolby Atmos system setup allows speakers to be kept both horizontally and vertically.

This means that Dolby Digital Plus channel setup ranges from 2.0 to 7.1 channels only. Here the first number (i.e., 2 and 7) stands for the number of horizontal speakers, and the second number (i.e., 0 and 1) stands for subwoofers. Thus, allowing only two or more channels setup to produce surround sound.

Dolby Digital Plus audio format is used in Blue Ray disc. It is also compatible with HDMI. Most tablets and mobiles also support this digital audio compression technology.

Dolby Atmos can be found on various platforms, from Blue-ray disc to movies and home theatres. These can even be found integrating with TV broadcasters, streaming services like Netflix, Amazon Prime Video, and other hardware manufacturers.

Dolby Digital Plus is a speaker-based system that assumes all speakers are placed at the same level.

On the other hand, Dolby Atmos is an object-based system that uses 3D experience as it supports more channels. It can also make use of Dolby TrueHD or Dolby Digital Plus to produce high-quality surround sound.

As Dolby Digital Plus is a speaker-based system, when an illusion of sound is to be created behind the audience, the sound is just thrown to a particular speaker.

On the other hand, as Dolby Atmos is a 3D system, it doesn’t throw a sound to a particular speaker but the particular 3D space. This arrangement provides a more natural and powerful sound illusion and usually enhances like a flying helicopter.

The difference being Dolby Digital Plus uses your existing speaker arrangement to produce sound. Whereas, Dolby Atmos not only makes use of software but also of compatible hardware to provide an enriching sound experience.

Thus, Dolby Atmos is a bit above Dolby Digital Plus in providing superior sound quality due to the use of specific hardware. 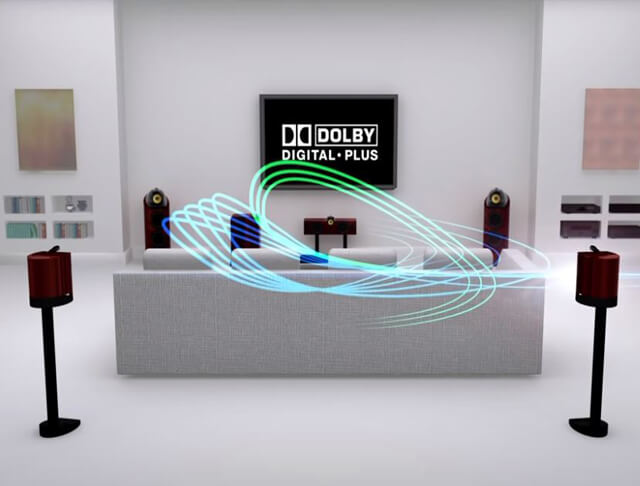 Dolby Atmos, when used with Dolby Digital Plus, provides the best sound experience. This is also being used by streaming services like Netflix and Amazon as Dolby Digital Plus is the only version that is compatible with HDMI Arc.

In comparison definitely, Dolby Atmos is a better version of providing surround sound than Dolby Digital Plus as it uses an object-based system, supports multiple channels setup with multiple arrangements as well.