Since the first camera phone that could take videos, we’ve come a long way. Even though the quality wasn’t great, it was the start of a new world of technology that brought us to this point. You might not know how to hook up your phone, tablet, or laptop to an external monitor so that you can watch videos on it.

Resolution and Frame Rate: What You Need to Know

The number of images shown per second is called the frame rate, and it is written as fps (frames per second). Have you ever drawn pictures in the corner of your notebook and turned them over to make them move? The frame rate works like this. The picture will look better if it has more frames per second. So, when you see 30fps, it means that 30 separate frames were taken in one second.

How to Pick the Right Resolution and Frame Rate

As long as you choose based on your needs, there is no right or wrong choice for resolution and frame rate. As we’ve already said, the most common combinations for dash cams are 4K at 30 frames per second and 1080 at 60 frames per second, but here’s something to keep in mind:

The more pixels and the higher the resolution, the better the quality, but the bigger the file size.
The file size gets bigger as the frame rate goes up, but the video gets clearer.
The real question is whether you want more pixels or a clearer picture when it comes to filing size. Before you jump in and choose your recording quality, you need to think about a few things.

What are you planning to catch?

Do you know what you’ll use your dash cam for? Unfortunately, a lot of people don’t get a dash cam until something bad happens, like vandalism, an accident, etc. Then it comes down to the reason and which one, 4K at 30 frames per second or 1080 at 60 frames per second, gives the best coverage. The contrast and color range are better with 4K resolution, which makes it great for parking mode. You can zoom in without losing quality, and it works better when the lighting isn’t as good.

How much will things move?

If your video will have a lot of movement, you might want to choose a higher frame rate over a higher resolution. The reason for this is that if you need to slow down the video to show the point of impact or fine details that can’t be seen with the naked eye at full speed, you can do so with a higher frame rate without losing clarity. One exception is when there isn’t much light. In these situations, having a high frame rate doesn’t make the video any better.

Playing the Video and Getting It to You

The resolution and frame rate also affects how your dash cam footage is played back and sent to you. The device being used to play the video will also affect how well it plays. Not all devices and screens can play games with higher frame rates or resolutions. Then, these are shrunk down to a size that the device or display can handle. There is always a chance that the quality of a video will go down when it is converted, but most of the time you won’t notice.

1. Putting or sharing videos on the Internet

You know that putting videos on websites like YouTube, Facebook, and Instagram is a very common thing to do. Most of these sites for uploading things to the internet let you choose almost any resolution you want. Still, many don’t support frame rates that are very high. For example, YouTube only allows 60fps. You can still upload your video, but the site will compress it to the most frames per second it can handle.

2. Watching the video on your phone, TV, or computer screen

Not only do you need more memory, but you also need a better graphics card and faster processing speed to get more frames. You want your screen to have a high refresh rate so you can see things better. If a screen says it is 60Hz, it means that its image is updated 60 times per second. The more frames per second you have, the faster your screen needs to refresh for you to enjoy the video. 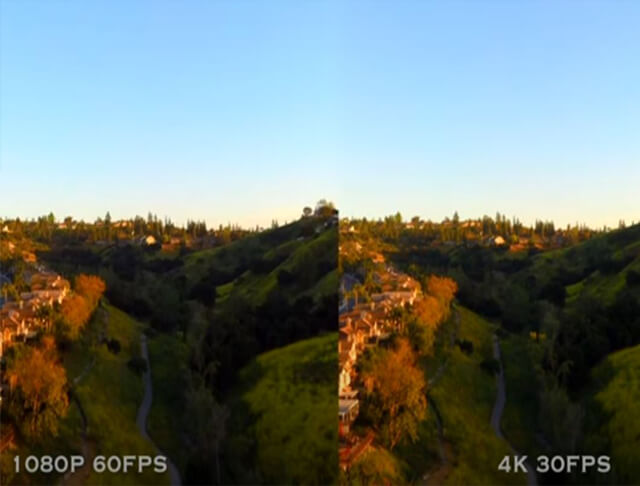 A higher frame rate doesn’t always mean that the video is better. It doesn’t matter if you have a 30fps or 60fps video as long as the quality is the same. When there are more frames per second, the video can be played back more smoothly.

The most common frame rate for video on TV, in the news, and on the internet is 30 fps. 30fps is used by many apps for smartphones, like Instagram, that record video.

With 60 fps, motion can be smoother. Many high-end HDTVs and even some games use this speed. For smooth slow motion, a 60 fps video is usually slowed down to 24 fps or 30 fps after it has been made.

Lower frame rates make the video look more choppy, while higher frame rates make the video look smoother. Because there are more frames per second in a 60fps video, it can record twice as much data as a 30fps video. When you choose 60fps, you can also slow down your video without losing the quality of the slow motion. You might be able to catch racing or drifting, which are things you can’t see with your eyes alone.

Well, it depends. I’d recommend 4k at 30fps for filming because even if you upload 8k at 120fps to YouTube, it will compress it to make it load faster. So, 4k would look more like 1080, 1080p will look like 720p, etc. But for gaming, I would suggest 1080p 60fps because fps speed is usually more important than resolution.

If your display has a refresh rate of 4K 30fps or 4K 60fps Hz, it can draw the whole screen 30 or 60 times per second. Displays with more power can have refresh rates that are faster.

Sources with up to 60 frames per second can be used with 4k@60hz. This could be a video game or a 60fps 4k broadcast of a sport or race. The fact that 4k@30hz puts a limit on HDMI 1.4 is not mentioned. This means that HDR and other new features from HDMI 2.0/2.1 are not available.

What You Need to Know About Resolution and Frame Rate

Before you buy, you should think about what you need in a dash cam and how good the video is. Do you drive at night a lot? Or do you plan to use your dash cam most of the time in parking mode? The better choice is 4K. Look at the higher frame rates if you think you might need to slow down frames without affecting their quality.

Here are some dash cams that let you choose between 30 and 60 frames per second.