Skip to content
MENU
Homepage / Computer / How to Fix CPU Over Temperature Error?

To fix CPU Over Temperature Error, try fixing the heatsink, slowing down your CPU or upgrading your CPU cooler, cleaning the inside of your PC case, or reapplying thermal paste to your CPU.

But if you keep reading, we’ll talk about why CPU Over Temperature Error happens, how to fix it, and what you can do to fix this error.

What makes the CPU Over Temperature Error happen?

When all of the CPU cores reach 100 °C, the ASUS BIOS shows this error. And the CPU fan or heatsink can’t cool the processor down. This might be because the thermal paste or grease has become hard. Then you have to get a new one. Or, the CPU fan might not be spinning at the right RPM. But the high CPU temperature could be caused by something else.

Users usually have these kinds of problems in hot places in the summer. No matter how good your CPU cooling system is, this will happen. If the temperature in your room is very high, the CPU temperature will also go up. Or, it could be that you haven’t given the CPU enough air to breathe. Also, dust can be a problem if you don’t clean your CPU every so often. If you have overclocked your CPU, this is definitely the problem.

When is an error about the CPU’s temperature not a big deal?

Don’t worry if you see the message “CPU over temperature.” The problem is not always dangerous.

Let’s say you’ve been playing games for hours on your system and it gets hot. There are many things that stop heat from escaping, like dust on the CPU fan that keeps it from spinning right. Because it is hot in the summer, the system usually heats up quickly, making the inside of the case warmer than usual.

In this case, this error message is likely to show up. So, you don’t have to worry about it.

When is it dangerous to have a CPU Over Temperature Error?

Suppose you’re just watching YouTube or a movie on your web browser when your system reboots and gives you an error message that says “CPU over temperature.” You should find a way to check the temperature and find a solution.

Follow the steps below to fix the CPU Over Temperature Error when the message starts to bother you. 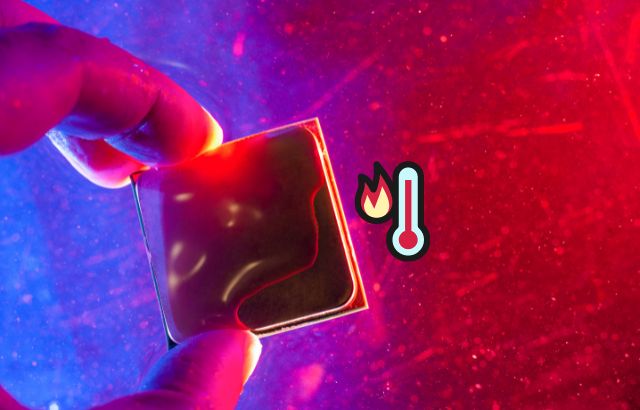 How to Fix the CPU Over Temperature Error?

If you are using the CPU cooler that came with your CPU, you may have trouble controlling the heat. Using a stock cooler might not be a good idea, especially if you have a CPU with a lot of cores.

Especially if you are a gamer or someone who often uses complicated programs, you should spend a little more on a better CPU cooler. If you are using an Intel stock CPU cooler, you should switch to a custom CPU cooler instead.

When compared to stock CPU coolers, aftermarket CPU coolers can take in more heat. If you like to overclock, you should get a high-end CPU cooler that uses air or liquid.

Keep in mind that the CPU Over Temperature message means that your CPU is running at a temperature that is too high or too low. So, if you replace your stock CPU cooler with a custom CPU cooler, the temperature of your processor will drop by a lot.

Most of the time, if your CPU is getting too hot, it’s because of the heatsink. This problem can be fixed by taking the heatsink off and putting it back on. A heatsink that doesn’t fit tightly won’t be able to get rid of the huge amount of heat coming from your CPU.

See also  How to Water Cool Your GPU for Maximum Performance

The heatsink on your CPU is very easy to move around. All you have to do is take off the screws on your heatsink and put it back on your CPU so that it touches the top of your CPU.

If you don’t know how to do this, there are a lot of tutorials on YouTube that can help you put the heatsink on your CPU the right way.

Setting the CPU clock speed to the default

There’s no doubt that overclocking your CPU can make it run faster, but it also makes it make more heat. And if you use a cheap CPU cooler, you may end up getting a CPU Over Temperature error when you try to turn on your computer.

So, if this is true, it’s best to set your CPU’s clock speed to Default Clock Speed. Now that you’ve done this, your CPU will produce less heat. You can keep an eye on your CPU’s temperature with a reliable program like HWMonitor.

You could also use a large PC case with multiple fans to pull more heat out of the case.

Put your computer close to a window

When you use your PC in a hot room, more heat can sometimes build up inside the case. Even so, the fans on your PC case are doing their job by pulling in fresh air from one end and pushing it out the other. Hot, humid air slows down the cooling process, though.

And if you live in a hot, humid place, put your computer near an open window so that fresh air can flow into the case. If you’re using a tower PC case, I’d suggest taking off the side panel and putting it in front of the window.

If you want better thermal performance, you should use a good thermal paste like Thermal Grizzly Kryonaut or ProlimaTech PK-3 Nano Aluminum.

A video that shows how to fix an overheated CPU:

The CPU over temperature error is very common and happens to almost all computers at some point. There are times when you can ignore it without putting your motherboard’s parts at risk. But if it happens a lot under normal circumstances, it should be taken seriously.

You can try to fix this problem in a number of ways, both with software and hardware. If you know a little bit about computers, you won’t need a tech expert to help you. So, you now know what to do when your computer gives you the CPU over temperature error.