When looking to get the most out of your hardware, water cooling is the answer for many. This is especially true when it comes to graphics cards. By water cooling your GPU, you can achieve lower temperatures and higher clock speeds than would be possible with air cooling alone. In this blog post, we will walk you through the process of water cooling your GPU so that you can get maximum performance from it!

The History of Water Cooling

Even though it may seem strange at first, water cooling came before air cooling in computers.

In the early days of computers, air cooling wasn’t enough to handle the amount of heat that early computer parts produced. So, there weren’t many other options. Either there was water cooling, or there was no computer.

IBM’s System 360 computers were one of the first places where water cooling was known to have been used. In the 1980s, when supercomputers began to be made and improved, the process became popular.

Today, components have much lower heat indices, and air-cooling technology has come a long way. This gives you more freedom in how you build your systems when it comes to cooling.

Most people will only need air cooling, which is great news for people who are building a cheap PC and don’t have the money to buy a water-cooling kit.

The highest level of liquid cooling is giving parts a cryo bath with liquid nitrogen, which lowers the temperatures of the parts instantly.

So, water will be used for liquid cooling at the consumer level.

Is it necessary to cool with water?

Air cooling should be more than enough for light to medium-heavy tasks, especially if your case has other fans to move heat away from the components.

But water cooling is usually used for tasks that require a lot of power, such as gaming, video editing, photo editing, and artificial intelligence. These tasks are known to cause a lot of heat in parts because they need a lot of power to stay up and running.

The main pieces used are: 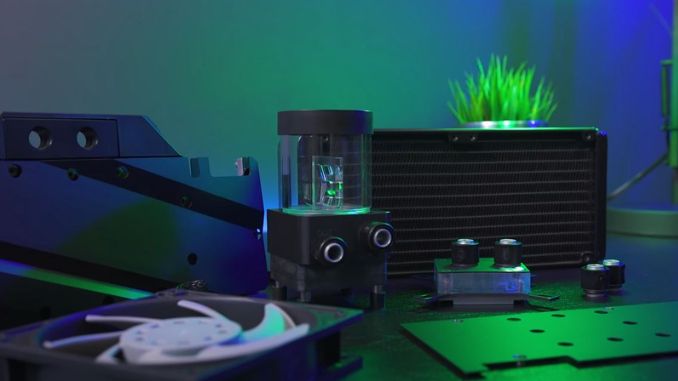 What is GPUDirect Storage?

How does cool water work?

Most PCs already have fans to cool the air, which is more than enough to keep the computer cool. But that’s not the only way to cool a PC, and it’s not even the best way for high-end PCs with a lot of hot parts.

People who are into computers often put a water cooler on their CPUs. Many people also use water cooling to cool down a GPU.

In a water cooling system, the liquid moves through the tubes and pulls heat away from the parts of the system.

A fan and a heatsink can also help move heat away from the parts that are the warmest. This cools them down and lets your computer run better than it might if you didn’t do this.

Is there anything dangerous about water cooling?

Even though it doesn’t happen often, water coolers can fail and cause liquid to leak out of the tubes. This can hurt your computer’s parts and make it useless. Most of the time, manufacturer warranties don’t cover damage caused by liquid.

How to Choose the Best Water Cooling System for Your GPU

Graphics cards can get hot quickly, so it’s important to choose the right way to cool them down. There are many different kinds of cooling systems on the market, but it’s important to find the one that works best for you.

Things to think about when picking a cooling system

It can be hard to choose the best cooling system for your gaming PC. Here are some things to think about:

How to check if the coolers work together

Before you buy the coolers, you should make sure they work together. This will help make sure that the cooler works well with your graphics card and doesn’t block airflow. There are a few easy steps you can take to see if a cooler will work: 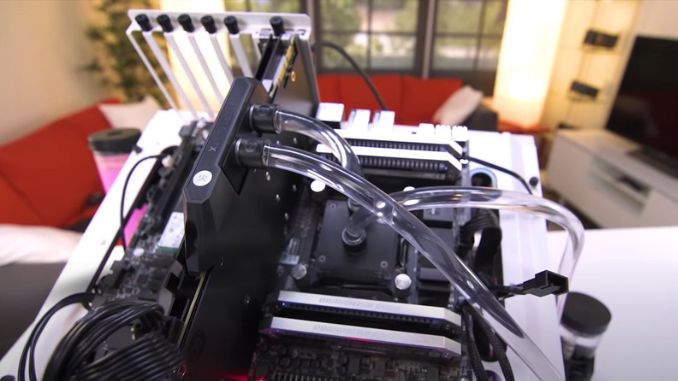 You may also like: Best Motherboards for the RTX 3080: Your Guide

How To Water cool GPU

Graphics cards are an important piece of hardware for gamers and PC enthusiasts. But, like anything else, they can get too hot and break if they aren’t cooled down properly. Water cooling is the best way to keep your car cool and running smoothly. Make sure you have the right water cooling kit and hose before you start.

Next, hook up the water cooler to the hose that goes to the reservoir and fill it up. Before you start pumping cold water into the card, make sure the water in the cooler is at the right temperature. Once the water cooler is full, turn on the pump and let the card soak in the cool water until it reaches its saturation point. And that’s everything you need to know to cool your graphics card with water.

It can be fun to cool your GPU with water. But, like any other part of overclocking, water cooling takes time and research into the best ways to do it.

This guide will explain how to use a case or water blocks to cool a GPU with water. So let’s get started.

Setting up and installing a water-cooling system

Graphics cards are essential for gaming, and the best way to get the most out of them is to cool them with water. Water cooling is the process of cooling the card with water instead of air. This is a great way to reduce thermal noise and overclocking risks.

If you want to buy a graphics card or are in the process of setting up a cooling water system, make sure to think about the following:

Does cooling a GPU with water make it work better?

As soon as you take a GPU out of the box, it is limited in some way. Most of the time, these are the limits set by the manufacturer to keep your graphics card from getting broken. Thermal throttling is the most common type of limit you could come up with.

A liquid cooling kit is the best thing you could do to your graphics card to stop it from being slowed down by heat and to get the most out of it. Your graphics card won’t enter the thermal throttling zone if it has a good cooling system.

Keep in mind that a water-cooled graphics card’s main benefits are better thermal performance and a little bit more clock speed. And these two things are good for either PC gamers or people who use their computers for work. On top of that, it costs a lot to buy a GPU that has been built and cooled by water. And if you want to change one yourself, it takes a lot of time to take it apart and put it back together again. 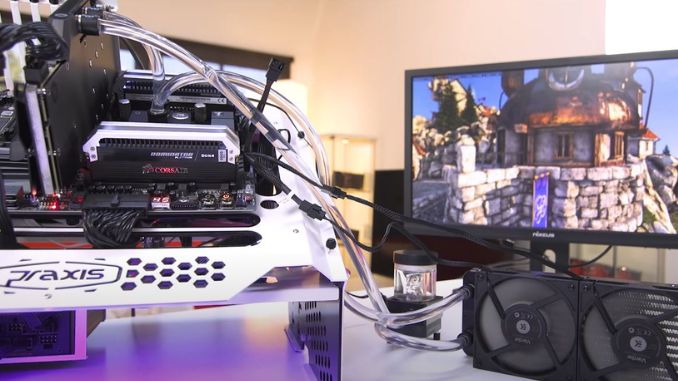 Is it better to cool with water or with air?

From a statistical point of view, water cooling is better than air cooling.

We’ll take a deep dive (no pun intended) into how these systems work so you can see why water cooling is more efficient. Liquid cooling systems are like the ones that keep car engines from getting too hot.

Most water cooling systems have a number of parts that move to make them work. The reservoir holds water while it’s being pumped through the system’s tubes. This lets the computer keep pumping water while it’s in use and keeps the water from getting too hot from being close to the parts (which would hamper its effectiveness.)

The reservoir is connected to a pump, which moves liquid through the system’s tubes to the parts that need cooling. When the liquid gets to a part that needs to be cooled, it will be directed into a “water block” that sits on top of a liquid cooling plate on top of the chipset.

The heat from the part is transferred to the water, which is then pumped out of the water block and back into the reservoir. Lastly, a radiator removes the heat from the system by pumping it out. This keeps the system cool. You’ll also need nuts and bolts to hold your new cooling system’s parts together.

At first, only CPUs could be cooled with water, and GPUs had to make do with the fans that came with them. In the last few years, however, people have been using water cooling more and more.

In the past, cooling GPUs with water was rare and required a lot of technical skill. But now you can just buy a kit and follow the instructions to put the parts together.

This was all you needed to know about how to cool a GPU with water. We hope that our guide will make it easy for you to do. The best way to improve the graphics performance of your computer is to use water cooling. By using water to cool the card, you can lower the card’s temperature, which will make the card work better.