Skip to content
Homepage / Technology / Electronics / HDMI vs DVI: Which Is the Better Video Connection?

HDMI and DVI are both types of video connections that allow you to connect your devices to a television or monitor. They are both popular options, but which one is the better choice? In this article, we will compare HDMI and DVI and discuss the pros and cons of each option. By the end, you will be able to decide which type of connection is best for you!

DVI and HDMI in brief

DVI was made by the Digital Display Working Group in the year 1999. DVI was made to replace VGA connectors and can only send video. Older monitors usually have DVI connections. You can buy adapters to change from DVI to HDMI. A good DVI cable that is less than 6 feet long usually costs less than $10.

The size of a DVI connector is much bigger than that of an HDMI connector. They are held together with two screws that go through square connectors. Most connectors have 24 primary pins in a three-row matrix on the front side. Four more pins are to the right of these ones. Seven different kinds of DVI ports exist. There are different kinds of DVI-I and DVI-A ports here. The ports can’t be switched around. There were mini and micro DVI ports on some older computers. These aren’t made anymore. Here are some of the most important DVI specs:

Hitachi, Panasonic, Philips, Silicon Image, Thomson, and Toshiba all came up with HDMI cables in 2002. They were made to send audio and video in high quality. HDMI was meant to replace DVI and older cables for video and audio. HDMI is great for gaming and other high-end computing needs. Most HDMI cables that are 6 feet long or less and are of good quality cost less than $10.

HDMI connectors take up much less space than DVI connectors and look very different. HDMI connectors are thin and rectangular, and the front has 19 pins. They don’t use screws to keep things safe. HDMI is the most common standard for computers, video games, and TVs. Even though HDMI connections are still very popular, DisplayPort connections are becoming more popular. There are also mico and mini HDMI ports on a wide range of small devices, like tablets and smartphones. HDMI can be used by a lot more devices than DVI. There are adapters that can change HDMI to DVI. Most of the time, these adapters only send video signals. Here are some important HDMI specs:

HDMI vs. DVI: 11 Things You Need to Know 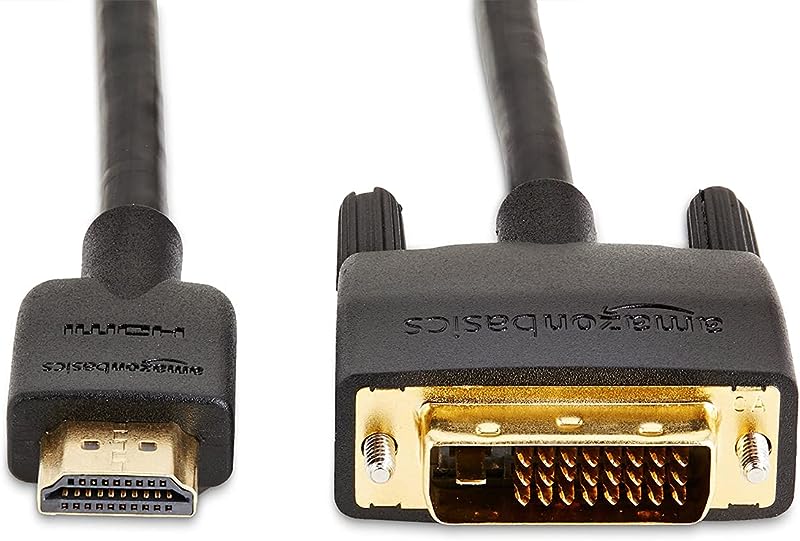 Because HDMI and DVI have different shapes, it’s easy to tell them apart. Unlike the many types of USB cables, which often look the same but aren’t, HDMI and DVI ports are very different.

Since DVI is the older standard, it makes sense that it is also the bigger of the two. When looked at from the front, a typical DVI plug is rectangular, and most of its front side is made up of a grid of (usually) 24 pins in three rows. Four more pins are in a square to the right of this matrix. On either side of the whole thing are screws that hold it in place. DVI is a fairly big plug because it has a lot of pins and screws.

On the other hand, HDMI is much smaller. Its plug is a thin rectangle with a sloped lip at the bottom. There is a thin space in the middle that is surrounded by 19 pins. Even though HDMI plugs have almost the same number of pins as DVI plugs, they are much smaller, in part because they don’t have screws to hold them in place.

Keep in mind that both DVI and HDMI plugs can come in Mini and Micro sizes. Mini-DVI and Micro-DVI are only found on older Apple computers, like the first MacBook Air and the Mac mini from 2009. Mini-HDMI and Micro-HDMI can be found on more devices, like some tablets and phones, but they are still not as common as standard HDMI plugs.

When choosing between HDMI and DVI, one of the most important things to think about is what each standard works with and whether it will work with your devices. Check the ports on your hardware. This is the first thing you can do to find out the answer. Some computer motherboards, for example, have ports for both, but your TV or monitor may only work with one or the other.

HDMI is used much more often than DVI these days. This is especially true for laptops, where the smaller HDMI connector is more likely to be used because it takes up less space. It’s probably on computers, TVs, monitors, game consoles, and a lot of other kinds of hardware.

But even HDMI isn’t as popular as it used to be because DisplayPort and USB-C are taking away some of its market shares. As we’ve already said, the best thing to do is check your hardware to see what you’ll need. Don’t forget that you can always get an adaptor if you need to connect two different devices. 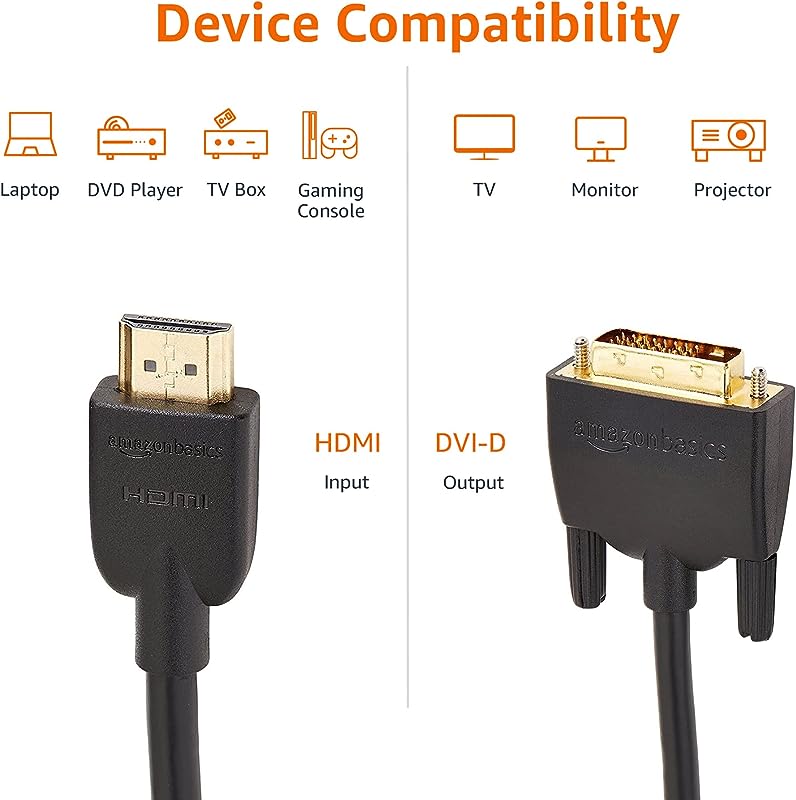 Both DVI and HDMI have limits on what they can show, both in terms of the resolution and refresh rate of the output device. Since HDMI is newer than DVI, it shouldn’t be a surprise that it works better in both cases.

The most recent version of HDMI, 2.1, can handle up to 42.6 Gbit/sec of data. So, it can support some really great combinations of resolution and refresh rate, like up to 4K at 144 Hz natively or an incredible 8K at 120 Hz with Display Stream Compression. It can also send out HDR video (although its maximum resolutions and refresh rates take a slight hit given the increased bandwidth used by HDR video).

In addition to being better for visuals, HDMI can also send audio signals, which DVI cannot do. This means that with HDMI, you only need one cable to stream a video from one device to another. With DVI, you also need to think about audio cables.

You might see expensive versions of each cable with features that sound cool and price tags that make your eyes water. Don’t fall for it. Even the least expensive HDMI or DVI cable will get your signal to where it needs to go just as quickly as the most expensive one, without putting a huge dent in your budget.

HDMI vs DVI: Which should you buy?

If you need to connect a DVI device to something else, you can always use an HDMI to DVI cable(opens in new tab) or an adapter(opens in new tab); neither will probably cost you more than £5. Since HDMI cables are newer, more common, and often less expensive than their DVI counterparts, there’s no real reason to use DVI unless you have to. 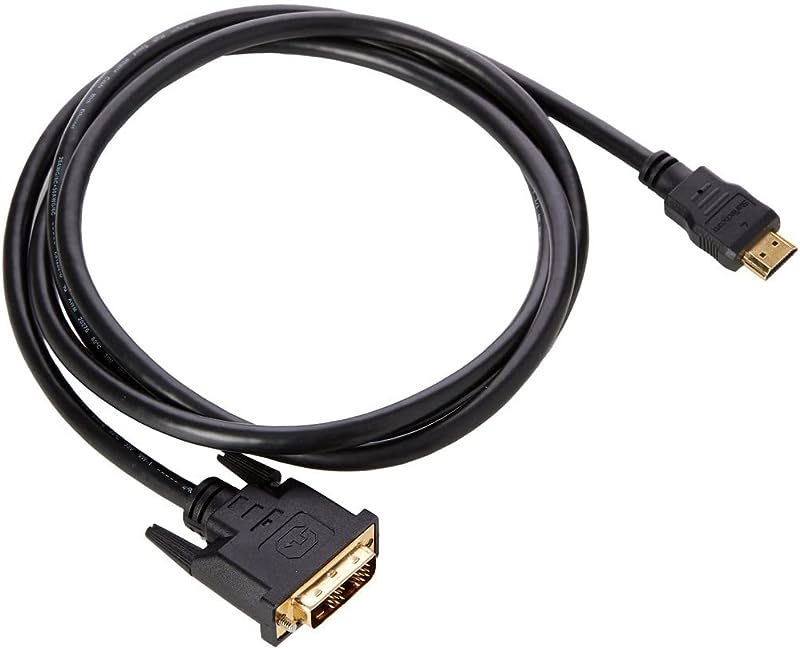 Is DVI Better Than HDMI?

When compared to DVI in general, HDMI is better in every way. HDMI is a modern and widely used connection. It also has higher transfer rates, refresh rates, and resolutions. HDMI also works with many different types of audio signals, such as DTS HD and Dolby HD. All of this is available for about the same price or less than DVI. If you already have an older system that meets your needs with DVI, you don’t need to upgrade to HDMI. You also don’t need to switch to DisplayPort if HDMI works for you.

Is DVI or HDMI Better for Gaming?

HDMI is better for gaming because it has higher transfer rates, refresh rates, and resolutions. It can also let you send HDR videos.

Which has a better picture: HDMI or DVI?

At the same supported resolutions, the picture quality of DVI and HDMI is almost the same. The difference is that HDMI can support higher resolutions with better quality.

Is there a difference between DVI and HDMI in terms of quality?

HDMI is a better connection because it can handle sound and has a higher resolution. It also has a faster rate of transfer and refresh. HDR video output is also possible with HDMI, which is great for gaming. Newer connections like DisplayPort are just as good as HDMI.

Unless you play a lot of games, a resolution of 2560×1600 at 60 Hz is more than enough for most desktop computer needs.

But if you want to buy a high-end 4K monitor (or multiple 4K monitors) and stream HD movies online, you’ll need to upgrade both your graphics card and your monitor so that they both support HDMI. Also, make sure you choose HDMI 2.0 to get the best data transfer rates and resolution.