The sound comes in different formats. With the existence of 3D surround sound, realism in sound has created the best audio experience possible for TV, music, movies, and gaming. Both formats are two of the most popular surround sound formats available in the market.

They create overhead sound effects that allow the surrounding sound to deliver superior realism than the older sound formats. There is much discussion on which between DTX: X vs Dolby Atmos has the better surround sound capabilities.

It has been a bit confusing for audio enthusiasts and people who prefer to watch movies in their home theatres. There seems to be no sure winner between them. It is important though to know the features, pros, and cons to have a clearer picture.

DTS:X and Dolby Atmos are audio codecs that save and deliver recorded audio data. It does not have any special sound system bed so you can use any combination of speakers.

DTS:X is an audio codec that creates multi-dimensional sound. Sonic accuracy is added to surround sound though the height element of some speakers. This means that with the encoded tracks and a DTS:X compatible receiver, the sound of birds chirping will feel as though it is coming from above you.

DTS:X is a surround sound format created to give the Dolby Atmos format some competition. DTS:X was launched in 2015 initially for home theaters. It comes with an object-based audio codec that creates multi-dimensional sound giving a feeling of real-life sound.

What is Dolby Atmos?

Dolby Atmos was launched in 2012. It was initially intended for movie theaters. It is a channel-based and object-based superior audio format.

It is a surround sound format that delivers 3D surround sound. This means the sound is reproduced in the back, front, sides, an above. Traditional 2D systems do not reproduce the sound above. The sound from above provides more realism to the audio.

This audio format can reproduce 128 objects and 10-bed channels via 64 individual speakers to move realistic sound around an auditorium. It allows the reproduction of effects such as a helicopter hovering above via ceiling channels. It can also use objects to reproduce bullet and bump sounds.

It is necessary to use compatible source materials (discs) when using Dolby Atmos- compatible receivers and speakers.

Similar to 2D surround sound, the speakers need to between a suitable physical location with its associated sound channel.

It is also possible to use Dolby Atmos speakers to direct an upward sound allowing it to reflect the ceiling and create a situation of sound coming from above. It may not be so reliable as a ceiling-mounted speaker but it can be effective. 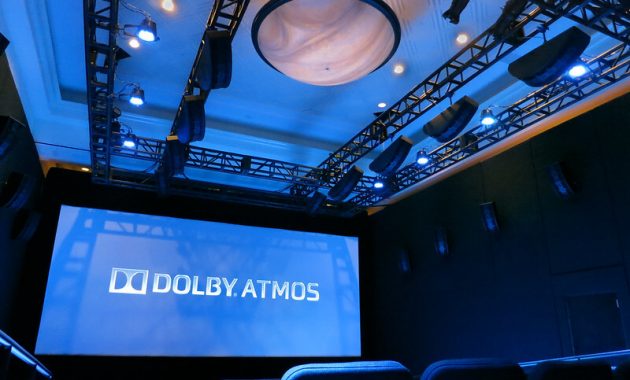 The soundtracks of both are recorded and mixed using the surround sound object-based technology. Filmmakers can place every sound anywhere within your listening space allowing their movement in 3D dimensions. Older surround sound formats can only move sound left to right, front to rear, and up and down.

The DTX:X has no required speaker arrangement and number of speakers. You just need to arrange the speaker system to fit the layout of your home theater room.  It can support up to 12 channels regardless of the number of speakers there is in your set-up.

The Dolby Atmos, on the other hand, is a 7:1 audio system with four speakers positioned at a height. Hardware requirements for Dolby Atmos and DTS:X

DTX:X does not need any special speaker configuration because it can work with the number of speakers you have. It can also work with an unlimited number of sound objects. Dolby Amos, on the other hand, has a 128-object limit.

DTS:X uses the MDA (Multi-dimensional Audio) royalty-free platform. Dolby Atmos, on the other hand, makes use of the propriety system. DTS:X, therefore, is a more open system. This, however, does not create so much of an impact in determining which between DTS:X and Dolby Atmos is better.

To be able to enjoy DTS:X and Dolby Amos, you will need to have Blu-ray movies with soundtracks encoded with DTS:X and Dolby Atmos formats. This will ensure you will get the best audio quality possible for your home theater system.

There may be a small library of movies right now but it will definitely grow over time. What you can do in the meantime is to up-mix the technology of your DTS:X and Dolby Atmos AV receivers to convert the 2D soundtrack into a temporary 3D soundtrack.

Converting from 2D to 3D will not be as good as the real 3D supported discs but it will allow your exiting Blu-ray movie discs to give you better sound quality.

There are so many arguments regarding both formats. It is unlike the earlier HD-DVD or VHS vs Bu-ray, wherein there was a sure winner because of compatibility issues.

What the entertainment industry will widely adopt between both formats is the factor that will eventually end the issue of which is the better audio format between DTS:X vs Dolby Atmos.

As of now, big Hollywood studios have shown equal support for both audio formats. It is now up to the efforts and innovations of these two 3D surround sound formats to ensure even which will eventually be the best choice.

From the point of view of the user, it is your preference that will affect your choice between DTS:X vs Dolby Atmos.

James Core - https://finddiffer.com/
Hey there, I'm James. I created FindDiffer.com, a website that helps people with their tech and electronics questions. I love to help others, and I'm always happy to answer any questions people have about technology! I finished Cornell University a few years ago, and now I live in the US. In my spare time, I like to work on new projects and play around with electronics. I also love spending time with my friends and family. Thanks for checking out my bio!