It can be difficult to choose which HDMI cable will transmit sound the best with all the available options. This is especially true of the most recent Dolby Atmos audio technology. So, is the HDMI 2.1 cable necessary or can HDMI 2.0 broadcast Dolby Atmos?

Any HDMI cable, including HDMI 2.0, may broadcast Dolby Atmos audio. However, you must also make sure that every component, including the TV, is able to offer Atmos. HDMI 2.1 cables are advised for devices that support HDMI eARC, but HDMI 2.0 cables will also function.

HDMI 2.0 is acceptable, but HDMI 2.1 would provide better video refresh rates and resolution. However, unless your devices employ powerful PC graphic cards or a few specific gadgets, the difference might not be noticeable. To determine which HDMI version is best for you, let’s examine each one in greater depth.

You don’t require an HDMI 2.1 cable, though. Even HDMI 1.3 cables can handle Dolby Atmos, and HDMI 2.0 works well for it. Atmos doesn’t require any HDMI 2.1 at all.

But compared to HDMI 2.0, HDMI 2.1 does support quite a few more things. For instance, to get a 4K video at a 120Hz refresh rate while connecting a few select high-end devices, such as a PlayStation 5 or a potent and high-end PC graphics card, you’ll need to use an HDMI 2.1 cable that supports up to 48Gbps.

Otherwise, 4K video at 60 Hz can be supported through HDMI 2.0. With the exception of 4K gaming with a refresh rate more than 60Hz, it can manage practically any video material.

What’s up with HDMI eARC?

The latest update is HDMI eARC, which supports the Dolby TrueHD audio codec. With this codec, you can get lossless compression, which gives you the best sound quality.

Normal HDMI and HDMI eARC are often confused with each other, so let’s clear up a few things:

In scenario 2, the best you can get with HDMI ARC and Dolby Digital Plus is lossy Dolby Atmos. But if you have HDMI eARC, you can use Dolby TrueHD to get lossless Dolby Atmos.

The difference between Dolby Digital Plus and Dolby TrueHD is easy to see. If you have a better sound system, it stands out even more.

You can find out about many new things with HDMI eARC, as well as some improvements over HDMI ARC.

HDMI ARC can process data at speeds between 1 and 3 Mbps, while HDMI eARC can do it at 37 Mbps.

The quality of the sound on the receiver is affected by the way HDMI ARC works. But HDMI eARC can support almost all lossless audio codecs with lossless compression.

There are often issues with audio lagging when using HDMI ARC. This makes it hard to get the video and sound to match up. You can fix the problem by making changes by hand, but it’s not the easiest fix. On the other hand, HDMI eARC makes automatic synchronization possible.

CEC is not needed for HDMI eARC to pair with or find other devices. HDMI eARC’s latest improvements include a dedicated data channel that lets devices share information with each other.

Last but not least, HDMI eARC works with older technologies. So, if one of your devices has both an eARC port and an ARC port, the data will still be transferred. But you won’t be able to use every sound codec. In this case, your eARC will work like ARC and offer a lossy compression. 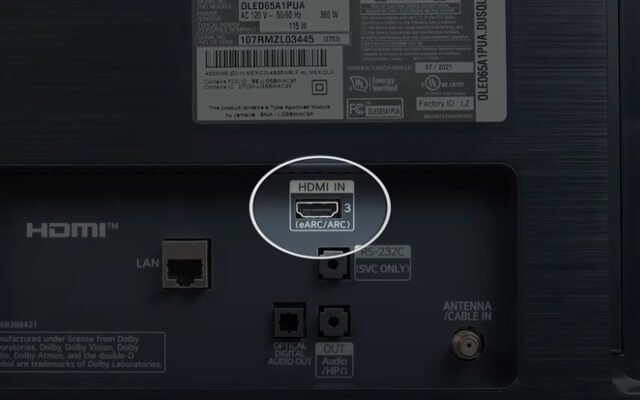 How Dolby Atmos works with HDMI and HDMI ARC

With the release of HDMI ARC, HDMI cables could start to send audio in the opposite direction. For example, you can connect a soundbar or A/V receiver to a TV’s HDMI ARC port to get a video signal into that input, but it can also send audio signals to the speakers.

Most HDMI ARC ports can also handle Dolby Atmos audio. This means that a surround sound experience can be made using only one cable.

Note: The Dolby Digital Plus audio codec is the only one that works with HDMI ARC to make Atmos sound work. This is not a lossless compression method. Thank goodness, the Dolby TrueHD codec is supported by the new HDMI 2.1 with an HDMI eARC port. Find out more about HDMI ARC and Dolby Atmos.

What can you watch with Dolby Atmos, and where can you find it?

Now, it is much easier to stream Dolby Atmos content. Since Atmos content is available on so many video platforms, you don’t have to go to a movie theater to hear it. Just connect the right devices and enjoy the 3D sound.

Just look at the title of the video to see if it can be watched with Atmos sound. People often watch Atmos content on online video platforms like Netflix, Disney+, Vudu, Prime Video, and others.

To set up, you need to make sure that both your TV and soundbar have HDMI eARC/ARC ports. If so, you can connect one end of the high-speed HDMI cable to your TV and the other end to the soundbar.

There are a number of media players that can play Atmos content. Apple TV 4K, Amazon Fire TV Stick, Roku Ultra 4K, and more are some of the most popular options for users. You can use these devices to look through the video streaming services for Atmos content to play.

When it comes to setting up, the process is easy. Use the eARC or ARC port to connect the media player to the soundbar and the soundbar to your TV.

You could also use the HDMI eARC/ARC cable to connect the media player to your TV and your TV to a soundbar that supports Atmos.

Blu-Ray discs with Atmos sound can be watched.